I Miss You Antarctica came to the Arts Centre Melbourne (and our homes) on 5 September as part of Take Over! 2020. With her signature genre-busting dramatic vision, Finucane is using her Art vs Extinction Suite of performances to focus her audience on the accelerating extinction rate. ‘I miss you, Antarctica,’ she says, flickering like a silent movie star to piano music by the exquisite Rachel Keys. Her long, sensitive hands fashion a penguin from origami. Her face contorts in grief and fear. How can we contemplate our closest southern neighbour without its ice? Without its penguins? And yet, with climate change hurtling towards critical, this scenario is a bleak possibility. 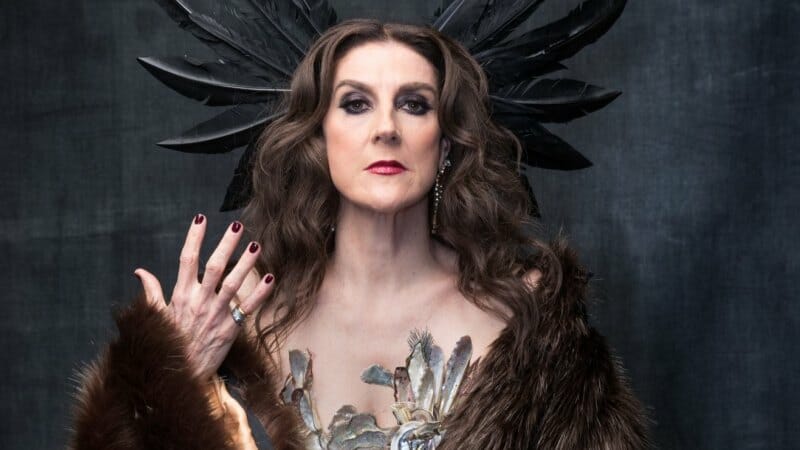 Finucane might work on a world stage, with a global vision, but she knows real power begins with small individual actions. She asks everyone who views her performance to make and bring an origami penguin. For every penguin attending, she partnered with Fifteen Trees to plant one tree.

One seedling will grow, will create a home for numerous creatures, will stabilise, inspire, and nurture every living thing in its vicinity. Small kindnesses…have epic consequences. Moira Finucane

All up, on the day (and later on socials) 150 original penguins were created. They were drawn, folded, photographed, knitted, glued and assembled. And as a result, 150 trees were planted on the western plains of Victoria, at Gariwerd (Grampians). Aboriginal people have had an association with this district for more than 30,000 years. Traditionally known as Gariwerd, the land is at the centre of creation stories for many of the Aboriginal communities in south-western Victoria. The trees were planted (as part of a 3,000+ tree project) by Andrew Borg and his team at Buloke and Northern Grampians Landcare (BNG). They were distributed to a number of landcare members including Hayley & Luke Batters, Scott & Laura Nicholson and Sam Reading. These members are working together to improve the native biodiversity of the district, increase carbon levels in the soil, help combat erosion and most importantly to create a bio link for native wildlife. My penguin for a tree!

As always, we are humbled to be a small part of the breathtaking Art vs Extinction campaign slash spectacle. If you’d like to craft a penguin, instructions can be found here. We are still counting penguins and planting trees. Take this opportunity to enact your own small kindness … and if you’re not already on board, to join Finucane’s epic quest on behalf of our voiceless and vulnerable.

Sarah is an artist whose passions include the stories and experiences of women and narrative driven creative work. Her aim is to delight, to reveal glimpses of everyday beauty, and to celebrate flights of the ordinary. Sarah works across a range of media, with an abiding interest in pen and ink, mixed media and the human form. You can find Sarah here.